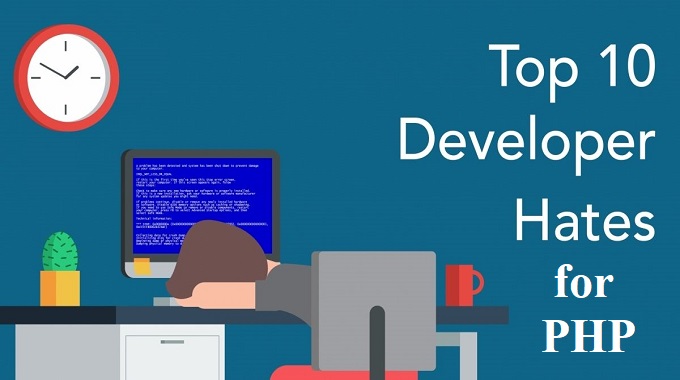 If you are a developer, you may be familiar with hypertext preprocessor (PHP), a server-side scripting tool used to develop web applications.  Since it is an open-source programming language, it is available to any developer interested in using it.  It is like manufacturing a car and making the design model or technological innovations available to anyone interested.  You can modify, adopt without fear, and redistribute the design and technology used to make the car.  That is the same concept that applies to open-source PHP.

Many developers use PHP because they love it or have learned to work with it.  Others are less enthusiastic about it.  In fact, some developers say they hate PHP.  So, why do some people loathe this programming tool?

When creating PHP, a big challenge that developers have is remembering to type PHP code and remembering to type HTML.  You will find that combining the two creates a big selling point for the programming tool, but it may be difficult to utilize this feature fully.

If you are not careful and use both PHP and HTML improperly, it will appear as if you have two files that are running on two separate layers.  For the correct functioning of both, it is important for developers to use the correct PHP and HTML tags in the proper places.

However, things may look muddled in PHP because its design may allow developers to mix different elements.  You may have the HTML markup mixed with controller logic for servers.  Of course, it is possible to separate these elements, and in fact, many developers do so.  The question is, why do you merge elements when it appears that separating elements is much better?

READ  7 Qualities to Look for in a Web Design Agency

On the flip side, PHP offers a big list of functions used to sort things.  Just a few of the options include array_sort, uksort, usort, and sort.  Having access to various functions may make sorting a big issue.

Just because PHP is touted an open-source program does not mean that it is the best option for all developers.  PHP may allow anyone to use it or even modify it, however, some of its features are only available on a commercial basis.

Users of PHP experience issues with 32-bit machines.  Big integers wrap around on the 32-bit machines, something that does not happen with 64-bit machines.  You may test the program on your desktop computer and it runs well, but after moving to the server, your program may run in a different way.  If you try recreating the error on a 32-bit PC, you may experience problems.

No programming language is 100 percent unbreakable or safe from corruption.  It does not seem to be fair for PHP users to blame the programming tool for huge groups of security holes.  It is possible to slip weird SQL strings past other programs too.

Unfortunately, it is easy in PHP to derive data or information from a form to MySQL.  People who are not accustomed to using a particular programming language can easily make the same error, but in PHP, it is easier to take things too far.

It may be confusing when you look at the dollar sign prefix in PHP.  We understand that when variables begin with dollar signs, it allows developers to insert new information in templates more easily later.  That makes sense because it simplifies things, but wouldn’t it also make sense to start constants with the dollar sign?  What if the text requires a question mark–will it be confused with the PHP prefixes?

Namespaces arrived later in PHP, so if you are going using PHP 5.3 and later versions, namespaces are more common to differentiate elements.  If you want to derive your own functions, you have to decide the version of PHP to use, because the earlier versions did not feature namespaces.

READ  7 Qualities to Look for in a Web Design Agency

When using older PHP versions, you need to ensure that elements do not collide with a library when creating your own functions.  If you use PHP 5.3 or a later version and you think of using namespaces, you should prepare to use backslashes (characters that look like \).

You will find many differences in different versions of programming language.  Different languages may not be compatible with each other.  You may experience problems with JavaScript and Java if you try running older code on newer machines.

For PHP, such problems may be worse.  Make sure that you have the right version of the programming language installed on your server.  Otherwise, you may encounter errors whenever there are changes, such as upgrades to different versions of PHP.

In the world of programming, there are many ways to do the same thing.  You can use a double slash or a number sign to specify the end of line comment.  Both double and float are used to refer to the same thing.

Since you may add many features to PHP, the program may become more complex.  Users may encounter many differences when they include additional features.

A programming language that commands a market share of about 79 percent, PHP is undoubtedly a great tool for server-side programming, but it may not be the best option for some developers.  While you cannot deny the popularity and usage of PHP, you may be able to deny its quality and functionality.

Problems associated with PHP may make many developers feel uncomfortable using the programming tool.  PHP has issues with language design as well as core implementations.  Because it is easier to access, many inexperienced developers have used it, making silly mistakes when adding features and implementing the tool.  PHP is an accessible tool, but it may not be the right tool for everyone.

Author BIO: Charles Watson is the current head writer for Sunshine Behavioral Health.  A SEO expert by trade, he enjoys writing about online tech issues when he has the time.  He can be reached direct on Twitter at @charleswatson00.

Digital Signage: What to Tell Your Clients About It

A Guide to #1 Page in Google

7 Qualities to Look for in a Web Design Agency